"Bunsen Is a Beast!"

"Beauty or the Beast"

A beast from space.

To prove that beasts and humans can happily coexist.

Arms that can multiply themselves
Can shoot small spurts of water whenever he uses one of his abilities
A hole in his head that shoots out confetti and small balloons
Removing his eyes while keeping them on the lobe
Eye lobes that can pop out of his head, extend, and coil
Inhuman strength
Stretchable head hole
Eating through his head hole
Regurgitating through his head hole
Projecting his long, sticky tongue
Can store a tent in his head and shoot it out of there
Has an extendable tail
Drinking through his tail
Shape-shifting
Has four rows of teeth
Can detach and reattach his head
His body can still move around when his head is detached
Will regenerate a new evil head if his good head doesn't find its body within about 30 minutes of loosing it
Can use his horns as feet to walk when his head is detached from his body
Extendable arms
Detachable arms
Can pull the skin of his head hole over his eyes and reveal his brain
Echolocation (he claims beasts are capable of it, however he has never been seen using it in the series)
Can pronounce words most humans cannot
Can open his mouth so wide his body extends
Can speak using a second mouth at the back of his throat
Can digest feathers
Can digest ice pop wrappers and sticks
Appears to have a sucker on his tongue
Can turn his head all the way around
Can swallow large amounts of food whole
Turns to ice and shatters when he gets a brain-freeze
Detachable feet
Prehensile tongue
Prehensile tail
Has pouches in his fur that can store large items
Can read the minds of others
Can digest worms
Can gush tears when sad
His entire body detaches when he sneezes
Creating strong winds by sneezing
Releasing green Sneeze Beasts when sneezing
Drinking through head

"I love all humans, especially that one!"

Bunsen is the main protagonist of Bunsen Is a Beast. He is a beast who is the first beast of a human school in real life. He is the best friend of Mikey, a human who helps him "fit in".

Bunsen has a very friendly, kind-hearted personality, though some find his boundless energy and optimism to be annoying, most notably Amanda Killman. He is also somewhat flighty and easily distracted, but always well-meaning, with a very strong moral center. Though he can be naïve, Bunsen is shown to be very witty and clever when he needs to be, and is capable of problem-solving on the spot and outsmarting his adversaries with little effort. Bunsen likes everyone he meets and always sees the good in people rather than the bad.

Bunsen is a wild spirit and tries to do anything and is striving to do anything as he wishes. He aspires to explore different worlds, try new things, and help people have fun and live free, often clashing against the tyrannical aspirations of Amanda Killman's evil reign. He and his best friend Mikey travel leisurely all throughout Muckledunk, often getting themselves into many exciting and dangerous situations.

Despite Bunsen's easy-going nature, there have been times where he has been pushed to his limits. For instance, in "Unhappy Campers", whenever the Beast of Muckledunk Blog posted an annoying blog about what he had for lunch, he would yell at him.

Bunsen is a square-shaped monster with short purple horns, a tuff of blue fur on his head (which is actually his Headspout), a blue face, and round yellow eyes. He also has big pink lips, an over-bite, a cyan chest, and pink arms. Bunsen has a teal torso, a white bottom, stubby pink legs, and a short blue tail with purple spikes on it.

Mikey is Bunsen's best friend. Bunsen has become very good friends with Mikey, and their relationship could possibly be seen as brotherly; as they always look out for each other and help each other out. Mikey is very loyal to Bunsen as Bunsen is to Mikey, and they can be seen hanging out with each other most of the time.

Bunsen and Amanda Killman first met in "Bunsen Is a Beast". Bunsen wouldn't exactly call Amanda a friend because she is always trying to get rid of him; despite that, he is always tolerant towards her.

The exact relationship between Bunsen and Beverly is currently unknown, as they rarely interact with each other.

Bunsen and Darcy are good friends.

Miss Flap is Bunsen's teacher. It's unknown of their relationship as of this point.

Cosmo and Bunsen met at a "Creature Con", a place where all magical creatures come to unite.

In "Bunsen Screams for Ice Cream", Bunsen is attracted to the music and ice cream from Commander Cone's truck. After getting bribed by Amanda, Cone uses his ice cream truck to distract Bunsen from school so he will be expelled. Fortunately for Bunsen, with help from Mikey, he resisted the sounds of the ice cream truck, and after school, Cone offered Bunsen and Mikey his truck. In "Astro-Nots", Bunsen and Mikey ask Commander Cone to give them a tour through Outer Space, thinking he is a Mastronaut. As the episode progressed, the three of them became good friends, and with Bunsen and Mikey's help, Cone changes from ice cream vendor to an actual Mastronaut.

Every episode ever of Season 1. 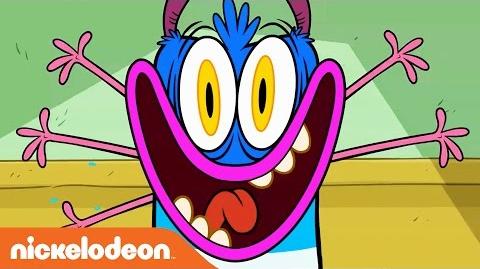 Bunsen Is A BEAST Get to Know Bunsen! Nick

Retrieved from "https://bunsenisabeast.fandom.com/wiki/Bunsen_Beast?oldid=9701"
Community content is available under CC-BY-SA unless otherwise noted.